Back in 2005,  John Kordrupel wrote an article in the H-Files, Hilbert College’s former student newspaper, about cell phones and how they are taking over our lives. 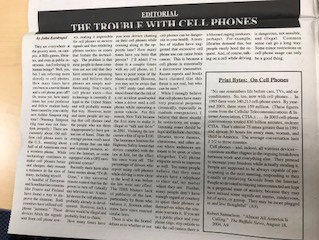 “The Trouble with Cell Phones,” from a 2005 edition of the H-Files.

Now that we are in 2017, we cannot live without using our cell phone multiple times a day. When this article was written, the first iPhone had yet to come out, and getting on the Internet was troublesome. We now live in a time when you can use an app to get a stranger to show up and drive you places.

The problems that people had with cell phones back in 2005 are far different from the problems of today. Back then, cell phone problems included going off in a movie theater or during class. Institutions would combat people using their cell phones too much by using jammers that would scramble the signal from the phone preventing its use. Talking while driving was also a big concern,j while today, it has evolved into texting while driving. Along with just being a mild annoyance, cell phones have evolved greatly and now some are as powerful as today’s computers.

With Internet access anywhere and all sorts of new features like apps, checking your bank account, sending e-mails, and being able to communicate with newer car models, people can’ live without their smartphones. Not to say that these upgraded phones don’t come with their own problems. People are glued to their phones these days, and, with all the world’s information at the tip of their fingers, who can blame them? But, being attached to your phone can be a bad thing; having everyone connected and being able to reach you can be a bit much and,  sometimes, you need a break.

Phones have changed so much in the last decad. People had once seen phones as a major problem, now everyone has one. Whether or not people like their phone, they still use it every day. Phones are an important part of everybody’s life now, and, while they still continue to change and upgrade, new problems will arise and the problems that we have now will be looked back upon as laughable.