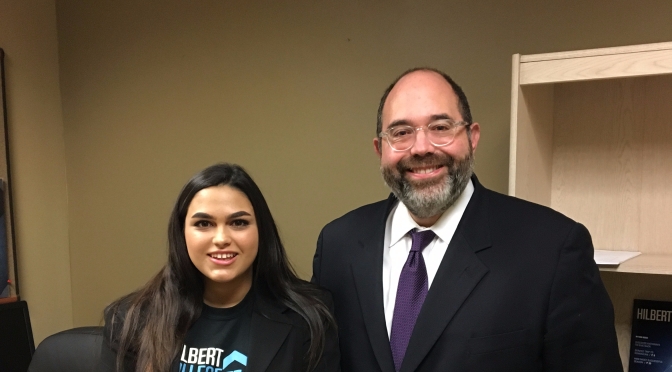 This is part three of a five-part series for Yasmine Dabash’s Fall 2017 Honors Project. For this project, Dabash interviews five journalists about their careers in journalism. Here, Dabash speaks with Aland Bedenko a local lawyer and writer.

It is with much esteem and much pride that I present to you my interview with Alan Bedenko. Before I continue with the article associated with Bedenko’s interview, let me share a story with you. A story of struggle.

I was using a third-party video editing application to edit the videos (big mistake) for my Honors Project. Somehow, I managed to replace my fully operational video interview with Bedenko with a corrupted video file.

Panicked, I called a close friend who works in the field of information technology. Alas, my friend told me gently that I would not be able to restore the file to its previous functioning glory.

I refused to accept no for an answer. Six hours and what seemed like hundreds of third-party applications later, I was able to fix the corrupted file.

Pro tip: Always have a backup copy of important files. You know, NASA lost the original tapes of the moon landing because they did not have backup copies of the tape. Don’t pull a NASA, just don’t do that to yourself.

But, I digress. Onward with my interview with Alan Bedenko.

Alan Bedenko is a litigation attorney who writes political commentary in Western New York and has done so since he moved to the region in 2001.

More so than journalism as a concept, Bedenko is consumed by politics. It makes sense, due to the fact his bachelor’s degree from Boston University was in political science.

Bedenko’s advice to any Hilbert College student looking into journalism is “consume as much journalism as you can.” Bedenko suggests following alt resources like The Public (for which he writes) because he believes mainstream media sources, such as MSNBC and Fox News, have become tarnished and are no longer reliable or valuable.

At the end of the interview when I asked Bedenko if he had any questions for me, he asked me about my take on Middle Eastern politics due to the fact I lived in Egypt during the Arab Spring. We proceeded to talk about dictatorships and ideal democracy.

If you are interested in Bedenko’s work and career, here are some resources: