“I’m out because you can’t hold back all this sass,” Hilbert Spectrum treasurer Corey Boice proclaimed at the Coming O 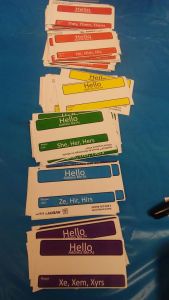 ut Day event held in Bogel front foyer on October 12th from 12pm to 3 pm. Though Coming Out Day is on October 11th, Student Activates wanted to recognize the LGBTQIAP+ community when everyone could attend and learn about the importance of the day.
“The purpose of the event is to honor the 1987 March of Washington,” Tommy Vane, director of student activities, asserted. “It’s to inform about proper pronouns, different sexualities, equality, see what students come out as allies, and to just celebrate.” Adorned on his chest was a “He/His/Him” sticker, though there were many to choose from like: She/Her/Hers, Ze/Hir/Hirs, Xe/Xem/Xyrs, They/Them/Theirs, and even one left blank for people to fill in.
“This was our first time doing this event. I received excellent feedback. Several students were excited to see their flag/sexuality/gender represented through signage or nametags. I received several “thank yous” from students, faculty, and staff for hosting the event,“ Vane explained. The signages Vane spoke of were papers about different kinds of sexuality flags and what they represented such as the Pansexual flag, the Asexual flag, the Bisexual flag, the Transgender flag, and the Rainbow flag. Each one had an in
depth enriching description of what they stood for. There was also assorted sweets and an arrangement of fruits in a rainbow theme for those who wanted to participate.
Though there have been some leaps in equality, there are still places where those of the LBGTQIAP+ community would be in danger and same sex marriage isn’t recognized by the government. It may take longer for the world to recognize love is love no matter the outer shell, but Hilbert College is doing its part by giving the necessary attention and exposure that the cause deserves.

One thought on “Coming Out Day”