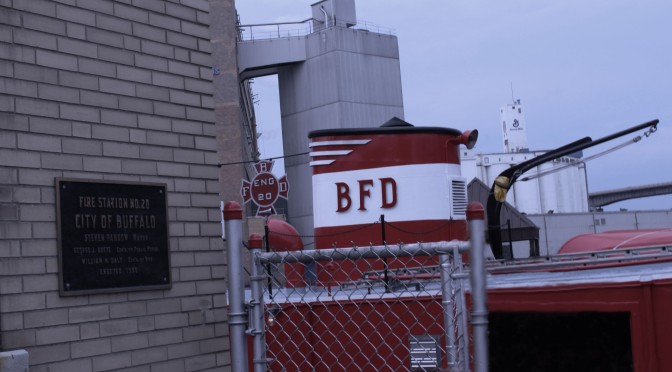 The fireboat Edward M. Cotter is a National Historic Landmark, commemorating history and service to Buffalo, NY. This week, Hilbert College Media Camp’s student journalists and counselors learned about that history on a private tour of the ship.

Walking on the deck of the ship was like walking on history. A cool breeze came off the Buffalo River and nearby Lake Erie. The bright red paint of the gently rocking boat stood out in sharp contrast to the gray morning. We all crowded together in the original pilot house.

“Not fast, just formidable”, says Larry Fallon. And he’s right. The fireboat goes only about 11.5 miles per hour. The ship wasn’t built for speed, but for breaking the ice in the winter when the harbor freezes over. Fallon is a retired West Seneca police officer and a volunteer on the Cotter along with Jack Higgins, who gave the tour of the vessel and its firefighting equipment.

It is the oldest working fire boat in the world. There are four fire pumps that can pump a total of 15,000 gallons of water per minute. The water canons were designed to shoot with enough force to break the concrete walls of grain silos, which lack windows.

On July 27, 1928 the ship was reduced to its hull after an oil barge struck an oil tanker and caused the entire waterfront to catch fire. The ship was caught on a sandbar and the deck ignited. The engineer died, and several firefighters were severely injured. Fallon then showed us pictures of the Cotter fighting fires in the early 1900s.

After Fallon finished speaking, we followed Higgins to the bow of the ship where he showed us the pumps. As the campers took pictures, I took in the view. You could see the General Mills factory, which made the whole area smell of Cheerios. I also saw a young couple kayaking; the man smiled and waved. We then followed Higgins down into the engine room. The engine room had a low ceiling and felt very warm and humid. The steel staircase was very steep and narrow. Mostly everything was original. We saw the four engines and most of the equipment they use to keep the ship running. Our group then climbed up more and more staircases to get to the wheelhouse.

While the boat is a historic landmark, it’s still capable of fighting fires. It was last used to put out a fire the started atop a grain elevator on Smith Street in 2013.

The Criminal Justice and Forensic Science career expo is happening now in the Swan atrium. Stop by before 12:30 to check out opportunities in the law enforcement field.
The Black Student Union is hosting a dodge ball night tonight from 10 p.m. to midnight in Hafner.
Happy Monday, Hilbert. We hope everyone got to enjoy some of this gorgeous fall weather this weekend.
@cab_hilbert is hosting Halloween Painting in West Herr Atrium from 12-3 and 7-9 today. Come down and paint a skull.
Angie Ruffins tabling for an Adventure Club fundraiser. Head down to the West Herr Atrium to buy some snacks and support the club. They will be there until 3 p.m.
Peace Walk 2022: students spent the common hour walking to different locations on campus to learn about St. Francis, then shared a meal in the dining hall.
Loading Comments...
%d bloggers like this: