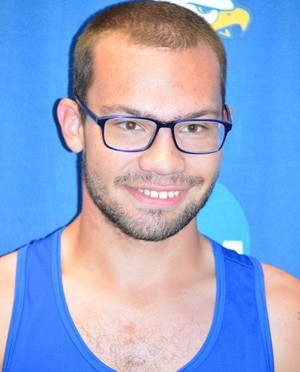 If you’ve heard the name Adam Droz lately, then you may be wondering, who is he? On Hilbert’s athletics website, you can find out where he is from and what his major is, but that’s the easy way to answer this question. The real answer lies with his teammate, who happens to be me.

Fast forward to this season and, although there has only been one meet so far, that was all the time Droz needed to make history. On September 2, 2017, at the Fredonia Invite, Droz ran his fastest 5k ever and broke the school record, completing the race in 17:41.

On behalf of all of his teammates, we could not be more proud of him. Droz is one of the hardest working athletes on the team, and he will surely break many more records. For instance, when the team has completed their workouts, Droz is still out there running. He makes sure he completes every workout to the fullest.

Nick Orlowski, the coach of the men and women’s cross country team, talks about Droz’s efforts explaining, “I think it is a testament of his dedication and effort to improve as an athlete.” Orlowski continues to discuss Droz’s running career this season saying, “I’d like to see him place top 10 at the AMCC meet and get under 28 minutes in the 8k.”

While Droz trains hard, he has a motivation and race ritual that makes him stand out from most athletes. Droz explains, “Before every race, I run for someone and that person changes for each race. For example, at Fredonia, I ran for my mom’s friend who is going through cancer.” These individuals’ stories inspire Droz to run for those who can’t.

Now, when some asks, “Who is Adam Droz?” you can say he is a hardworking athlete with a passion for running. His successes and accomplishments as a runner are just beginning, and he is not stopping now. Go Hawks!