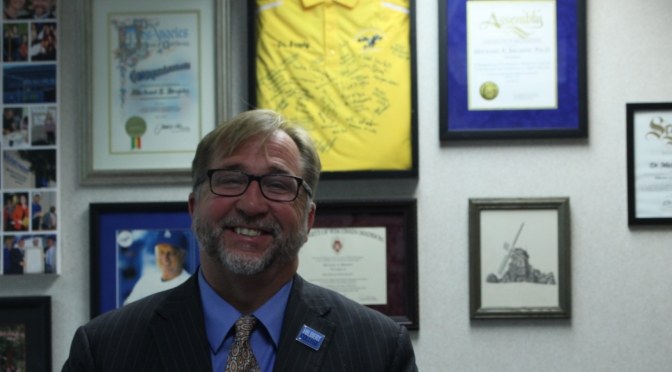 Last week, Hilbert College announced it’s moving to online class instruction after Friday, November 13 due to increased COVID-19 cases across Erie County. The move comes just a week before the original target date of transitioning to virtual learning, which was just before Thanksgiving.

Dr. Michael Brophy, the college’s president, said the decision to move earlier was a proactive one.

“This previous Sunday when the governor made it clear that Western New York was moving into what they call the yellow zone,” Brophy told HAWK Radio News on Thursday. “We just had to think about all the different logistics that would kick into gear if God forbid, the virus started moving quickly. And because Western New York is struggling right now with the virus, we thought it best to be able to send everyone home on Friday.”

The state’s yellow zone area includes Hamburg and much of Erie County. With that designation comes many new restrictions including limited dine-in seating at restaurants, gatherings are limited to 25 people or less, and certain businesses must close by 10pm.

Also included was a testing requirement for schools, mandating that they test at least 20 percent of students, faculty, and staff per week. While the requirement did not include private colleges like Hilbert, Brophy said the difficulty to meet that should the state mandate institutions like Hilbert to do so was also a factor in the early online transition.

“We determined through the governor’s office that we weren’t required to do that [testing],” he said. “But the fact is that if we needed to do testing, for better or worse, the local and federal governments just haven’t provided this infrastructure for lots of rapid testing for lots of people. So we realized that if we needed to test everyone, we were in a tough place. It wasn’t just financial, it was really just logistical with the tests to be there.”

When the coronavirus pandemic first hit the United States in March, many professors were caught somewhat off guard after Hilbert moved to teaching online. Dr. Brophy said this time, they’re prepared.

“The faculty worked all summer long on having their courses prepared to be taught online,” Brophy said. “They prepared to be online at Thanksgiving, so it’s not going to be a great hardship on the faculty. But obviously, we’re really, really sad about our students, especially our freshmen who are in their first year of college and having to deal with this. But we do think, as a Franciscan college, we have to be thinking about people’s whole lives, and welfare.”

As of November 15, Hilbert has reported 12 COVID-19 cases to the state from the beginning of the semester, including both commuter and residential students. Looking ahead to a return to having students in the classroom, Dr. Brophy is confident in the January 25 return date for the spring semester.

“I think our students know that we did a really good job this summer, we queued everything up, people came back, we started the fall semester,” Brophy said. “But it came down to a lot of planning and sacrifices. We’re gonna do the same thing for the spring. What we’re hearing from the medical community, of course, is that the next month will be very difficult for most of the country, but in a new year, the vaccines will be available to folks. So we are preparing to come to be back on the 25th for sure.”

Classes for this fall semester will continue on virtually until December 18.