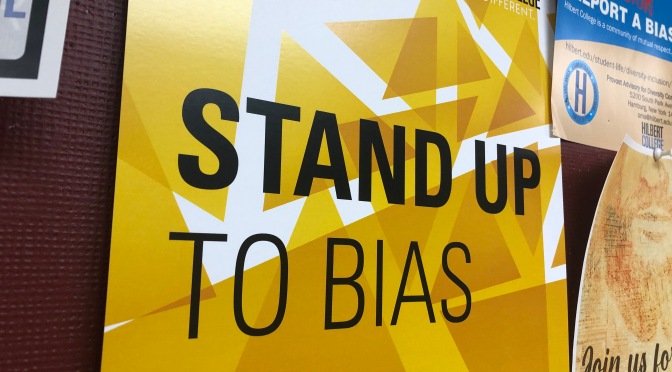 Hilbert’s Committee for Diversity and Inclusion hosted their final event for the semester on April 7th, with the topic being, “Approaching Service to Others with a Mindset of Cultural Humility & Intersectionality”.

“There’s nothing that we can do that will let us know everything about a specific community,” said Sierra Johnston, speaker of the discussion.

From the beginning of time, to what are headlines in the news today, there are many problems surrounding diversity and acceptance of others. With service-learning classes a requirement for all majors and many opportunities available for students to speak up and learn about these notions, this concluding event was one of the numerous ways that a Hawk learned about the vast diversity around them.

Johnston, who works as a volunteer coordinator at Jewish Family Service of Buffalo & Erie county, said that majority of the beliefs we hold which target a specific group of people are most often passed down to us in a family manner.

“As we enter roles in the community, sometimes there’s a power imbalance,” said Johnston.

With internships and community service playing a pivotal role in students’ lives, the discussion strived to focus on how we look at others around us which are culturally opposite of ourselves. Johnston got students pondering about various biases which are witnessed daily, in effort to show much they affect our daily lives. Some stated were, jobs that only a certain race hold, those that go shopping who are monitored because of their race, and the holidays celebrated in the mainstream media which observe only a small portion of certain races.

Being able to own our privileges and forget about what affects our negative beliefs surrounding a certain group are some of the many ways that can help ensure we are doing everything possible to become more accepting of everyone. This series of events were put in place to give students the ability to become aware of what they can do to become more accepting of others around them while receiving their Hilbert education.

“It was really designed to be a month-long program in February, in recognition of Black History Month and in honor of Martin Luther King Junior,” said Wozniak. “When the calendar turns, the need doesn’t stop for this type of education and that is why we continued it throughout this semester.”

This event comes at a prominent time as Hilbert just hired a new director of diversity, equity, and inclusion. President Brophy, announced the appointment of Diedre D. DeBose, who will begin her appointment on April 26th.