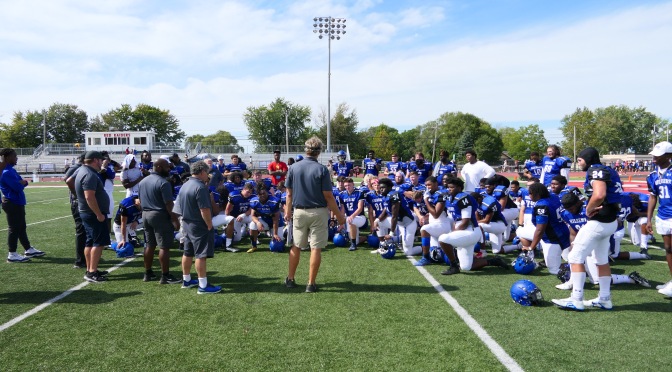 For Hilbert College, sports are very important  and key to day-to-day operations.

As such, the college felt the need to expand its college program this year to include Women Ice Hockey, Football and Track & Field.

When Tim Seil, who came to Hilbert in January of 2022 to take over as Athletic Director, he knew  he was interviewing for the job that Hilbert would be expanding its sports programs.

“When I interviewed for the position I knew that we were going to be adding additional sports programs,” he said.

Siel doesn’t consider it a challenge, saying that it just makes the job more exciting and that he was excited to put his stamp on the athletic department helping the growth of Hilbert College Athletic Programs.

“We have some great opportunities for local College athletes and high school seniors. With the addition of the football program,”  Rehbuam said. ”This helps to provide an opportunity as only  Hilbert and Buffalo State Colleges have Division Three athletic programs to offer football programs”.

Rehbaum said they really have some terrific coaches here at Hilbert that buy in to the system here and they generally care about the student athletes that is necessary for success at Division III.

“Those coaches have the drive and desire to bring them to competing the top 3 in their league and ultimately competing in the AMCC (Allegany Mountain Colleague Conference),” she said.

Seil said growing and expanding the Hilbert Athletic Programs in the Covid-19 pandemic was difficult given the many limitations put on athletics at that time,Seil talks about

“The pandemic forced everybody’s hand with everything in higher education,” he said.

He said recruiting was difficult because coaches could not go on the road as much due to restrictions.

“The pandemic did not have too much of an effect on  whether they were going to continue to add sports programs they wanted to add, Siel said.

Rhebaum said with their plans of expanding they hired full time coaches that needed workspaces and they also needed to make locker room spaces for this new and expanding sports programs. With that Rhebaum said they reduced student space and had to add more coaches’ space and states that was one of their administrative issues.

Seil says he “sees in the five-to-ten-year plan about adding facilities to accommodate adding teams because you need to add  facilities and talks about how they needed to attract more student athletes.”