The Criminal Justice & Forensic Science Association (CJ/FS) held its first club meeting on September 7. As the largest club on campus, it was no shock to see that the first meeting had a great turnout, with many new faces. The meeting began with the club’s president, Christopher (CJ) Paoni, describing the goals of the club. The CJ/FS Club hosts academic and professional events with the goal of increasing its members’ understanding and progress in their future Criminal Justice related fields. Activities include demos, workshops, and speakers in fields such as death investigations, various roles in law enforcement, career preparation, and many more.

The club relies on a point system, where members participate in events such as Adopt a Highway and Children’s Parties to receive points. Members can even earn points for helping with fundraisers like the Chicken BBQ, Yankee Candle, Pie a Professor, bake sales, raffles, and much more.

The points collected by members from these events are logged by the club’s secretary, Colleen Wilke. Members can use these points to participate in trips the club takes throughout the year, including the end of the year trip.

One of the club’s major contributions to Hilbert College is the Hawk Café. The Hawk Café is located in Bogel Hall’s commuter lounge, where members of the CJ/FS club serve a variety of coffee, tea, and snacks. Its hours are Monday through Thursday from 9 a.m. to 4:30 p.m. and Saturday from 8 a.m. to 12:30 p.m.

This month’s events include:

For those interested in the Monroe County Trip, it is available to all members, there are no points needed to attend. The trip is available to the first 25 members who sign up; those interested can find the sign-up sheet on the CJ/FS club board, located in Bogel Hall near the Chapel. Transportation is not provided; those attending should arrive early and promptly. For any further questions, contact a club officer or club advisor. 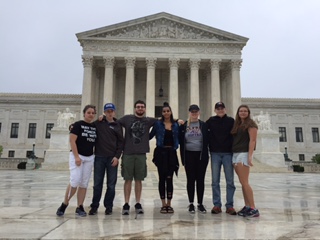